Last Saturday’s hike to Flume was part of the WHS (Winter Hiking Series) hikes.  The series kicks off with a 2-day evet in Pinkham Notch and continues with a series of hikes on selected Saturdays in November and December  to give participants more education and practical experience in winter hiking.  I’ve been to Flume twice via the Osseo Trail which was the same route chosen for this hike, but never in fall or winter conditions.  It was a very interesting to see the trail in fall with no leaves on the trees and snow at the higher elevations.

When we left the parking lot at Lincoln Woods, it was cold, but the sun was shining and the sky was blue.  Lincoln woods and the first part of the Osseo trail took on a nice sunny, golden glow due to the sunshine and all the fallen leaves.  This did not last the whole hike and by the time we were on the switch backs, the clouds had started to roll in.  We all knew there was a snow storm coming, so this was no surprise.  We continued upward and eventually came areas where it had snowed previously.  There was just a dusting at first, but the snow depth increased and right before the staircases we all stopped to put on microspikes.  Between the temperatures and all the packing of the snow due to the group size, things were getting a little slick.  The staircases are where the first views of the Pemi Wilderness come into view.  From the little viewing area partway up, we all enjoyed views out to Owl’s Head, the snow dusted Bonds, and ahead to the summit of Flume. 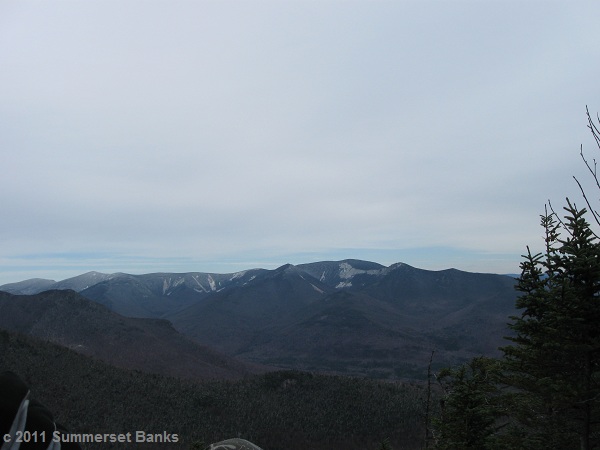 First views out to Owl's Head and the Bonds.

First view of the norther portion of the Franconia Ridge.

We cruised through the flat section after the staircases and soon arrived at the junction with the Flume Slide Trail and the beginning of the Franconia Ridge Trail.  From here it is a quick, steep journey to the top.  From the junction it is .1 mile to the opening in the trees and another .1 mile to the summit of Flume.  Popping out of the trees into the open before heading to the summit, we were greeted by views of a snowy Franconia Ridge ahead and a white topped Moosilauke off to our left.

Almost to the summit of Flume, which is up near the treeline at the right. 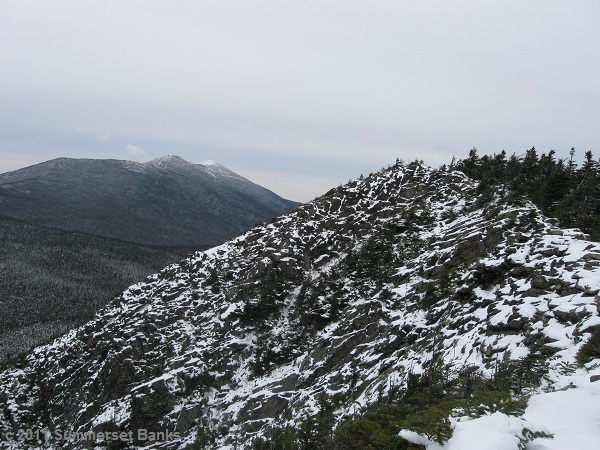 Flume with its similarly snow capped neighbors, Lincoln and Lafayette.

With the cloud cover, we emerged into a world of greys and white, with only the evergreen trees to break up the neutral landscape.  While on the summit, we noted how dark the southwest had become and how still it actually was in the open. 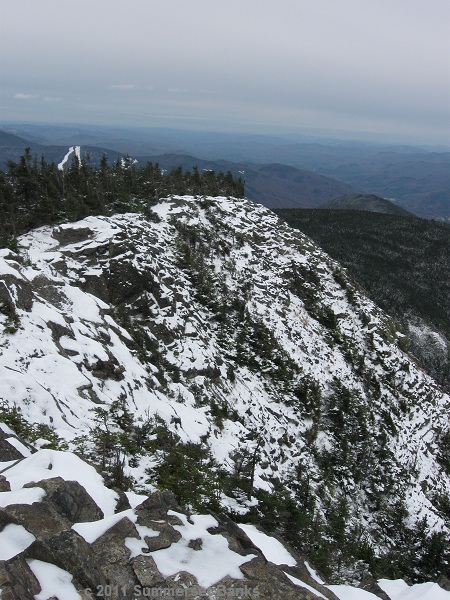 Looking back to where the trail pops out of the trees, with dark clouds looming on the horizon.

Only the evergreens break up this very steep, rocky section of Flume.

Everything was a bit too still, with very little wind if any at all on the summit and we knew that descending quickly and getting everyone on their way home in a timely manner was a good idea.

Waiting to descend the staircases; our jackets and gear were the only bits of color in such a grey day.

For such a large group, we actually made very good time and were soon on our way home, many driving right into the storm.  I made it home just as the snow was starting to fall.  From what I can discern, everyone made it home safely, but most of us experienced loss of power to some degree or other.  Some of our group still don’t have electricity back yet.   Let’s hope that their power will be restored soon!